Cologne were not able to secure a new starting record in second Bundesliga as they lost 3:5 to newly promoted SC Paderborn. 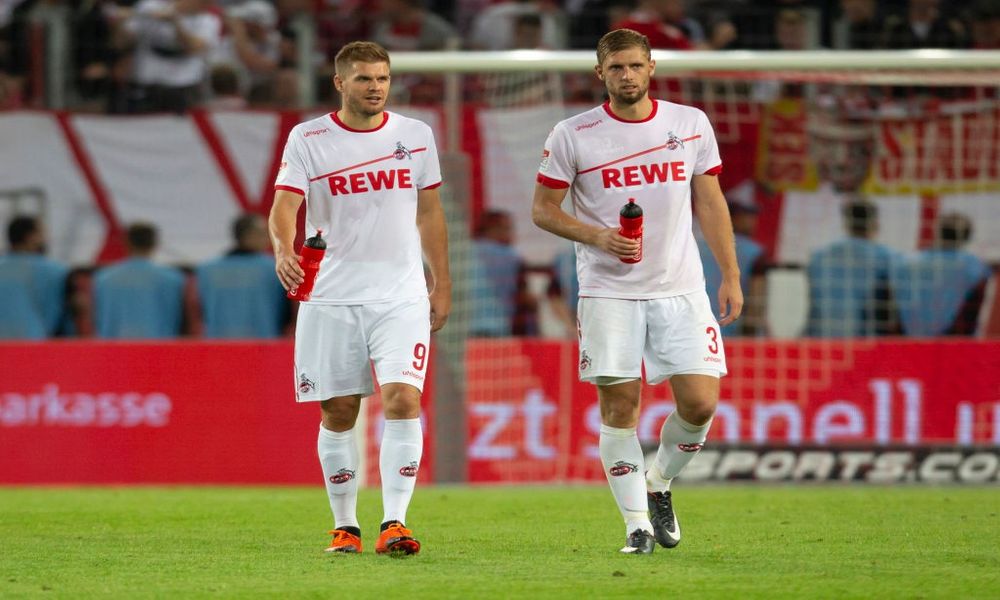 FC might have been able to celebrate a 3:5 scoreline last time out, but that wasn’t to be the case after the international break. A Simon Terodde brace wasn’t enough to prevent the Billy Goats’ late collapse, which saw Jonas Hector sent off and Paderborn take full advantage of a lacklustre defence.

Köln came into the game hoping to regain top spot after Greuther Fürth’s win against Holstein Kiel. Markus Anfang made three changes from that win over FC St. Pauli in a bid to do so. Matthias Bader, Jorge Meré and Marco Höger were brought in for Marcel Risse, Lasse Sobiech and Sehrou Guirassy.

Paderborn, on the other hand, were keen to climb the table and bounce back to winning ways after two consecutive 2:2 draws. Steffen Baumgartl opted for two alternations after their draw with VfL Bochum, as Lukas Boeder and Ben Zolinski dropped out of the starting line-up for Mohamed Dräger and Babacar Gueye.

Paderborn, as they have done against most sides this season, began reasonably well. They kept Timo Horn on his toes early on as the impressive Dräger went close on the angle. Köln responded and found themselves having to cut celebrations short when Simon Terodde’s early goal was chalked off for offside.

The Billy Goats turned up the pressure and continued to come forward, only to see that fail to materialise. That said, they looked good and were unfortunate not to be given a penalty when Jannes Horn’s cross struck Dräger’s hand in the area. Despite the appeals, Markus Schmidt remained silent. That anger only grew when Terodde had yet another goal ruled out for offside.

Finally, after Sven Michel had made home hearts flutter following a narrow miss, Terodde got his goal. Dominik Drexler had been threatening to supply Terodde all half, and finally did so with a smart ball across the box for FC’s main man to tidy up. A deserved goal for their first-half play.

Fast forward 60 seconds and the game was level once more. Michel was proving a real handful and after picking the ball in space between the lines, he let rip from 25 yards. The ball squirmed away from Horn and Babacar Gueye was on the spot to lash home from close range. The play had been largely all for Köln, yet they had no reward heading into the break.

Crazy second half capped off by Paderborn’s decisive double

A busy first half was followed by an almost unbelievable second, where six goals saw the lead change hands on a constant basis. FC duly got back in front after a sustained period of pressure at the start of the half. Terodde was the beneficiary of some superb play and movement, and the in-form forward gleefully tapped into an open goal following Christian Clemens’ cut-back.

Köln could have added to their lead but Louis Schaub was left with just too much to do from Clemens’ ball. Once more, FC were in control and were pegged back by Philipp Klement. He picked up Uwe Hünemeier’s pass and did the rest to set the nerves jangling around the Müngersdorfer Stadion.

Those fears were realised when just five minutes later, Paderborn won a penalty. Mo Dräger went down under Jannes Horn’s challenge and much to Köln’s frustration, Schmidt pointed straight to the spot. Klement’s initial effort was saved by Horn, yet he made no mistake from the follow up.

Hector sent off, Paderborn happy at the end

Terodde was denied twice by Leopold Zingerle in the aftermath, with his second stop one of true class. The hosts were growing frustrated and Zingerle’s form wasn’t helping, though there was nothing he could do when Jhon Cordoba slammed home on the volley from a corner. Cue top off and riding the corner flag like a horse. It looked like Köln had rescued a point with six minutes to spare.

Yet there would be another twist. As the game drew to a close, Jonas Hector was given a second yellow card in a six-minute span to leave Anfang reorganising his back-line and midfield. There was certainly no disputing that decision.

Hector’s sending off could be seen as decisive, but there are doubts over whether or not FC’s defending got any worse after their captain saw red. Just two minutes after going a man up, Paderborn made the numerical advantage pay. More good play out wide saw Sebastian Vasiliadis break behind the defence and square for Tekpetey to slot home.

While Anfang’s men did their best to push for a winner, the visitors would go on to grab a fifth. They were clinical in coming forward and Michel, who had been tireless and troublesome all afternoon, topped things off by clipping home Klement’s pass. The final whistle went not long after.

Köln first loss of the season saw them slip off top spot and into third, and they could fall as far as fifth if Arminia Bielefeld notch up a four-goal winning margin in Magdeburg and HSV beat Dynamo Dresden. As for Paderborn, a memorable first away win this campaign meant they rose into eighth.